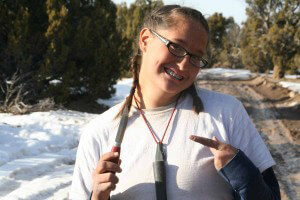 "Getting knifed" at RedCliff Ascent

This phrase, often written in letters from students to parents, can be alarming: “ Hey mom, I don’t know if my therapist told you, but I got knifed!”   Initially reading a statement of this nature in a letter, many parents first inclination is to call the program to find out if their child is injured.  However upon continuing to read the letter, parents begin to realize that somehow “getting knifed” is a good thing.

Upon entering the program, RedCliff students are not issued a knife with their camping gear.  Instead, they are taught to search for pieces of rock that can be utilized to make cuts.  All of the tasks that require cutting have to be completed with stones. These “tools” are used to cut notches into fire equipment, cut cordage, food, etc.

Many students eventually arrive at a point in their relationship with the RCA staff that they can be entrusted to be awarded a knife.  The process of being awarded a knife has come to be known as “getting knifed”.  RCA students all hope to “get knifed” at some point in their stay. They arrive at this point through consistent adherence to program rules, expectations and staff directives.  They also arrive to this point as they demonstrate their ability to see the importance of respect and trust in relationships.   Students “get knifed” at a ceremony in which the staff circle up the treatment group and talk about the importance of trust in relationships.  They then present the student with a knife and place the necklace with the knife around the student’s neck.

Having possession of a knife in a wilderness setting makes life much easier.  Tasks that can take hours with stone tools can take merely minutes with a knife.  Students who are awarded knives will often carve well-crafted spoons and other useful tools.   Building bow drill fires and completing the traps assignments can be accomplised much easier with the use of a knife.

Most importantly however, is the status, respect and pride that accompanies a student being awarded a  knife.  Students wear the knife around their neck in a special sheath that hangs on a necklace.  Students wear the knife with pride as it is an outward symbol of their efforts to be obedient, respectful and committed to trustworthy relationships.  These actions are a part of the formation of an experience in which students begin to feel the satisfaction that comes with embracing structure in their lives rather than defeating structure.

The next time you hear about a student “getting knifed” at RedCliff, you will know  that this is really a good thing and reason to celebrate rather than be alarmed.  Matt Bulkley, Therapist