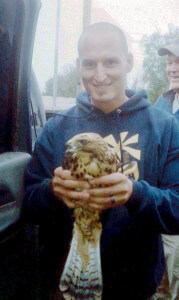 As Intake Coordinator for RedCliff Ascent, I ensure safe transportation of our new troubled teens students to see the pediatrician for their initial physicals as part of the intake process.

Last week, while returning to the field after one of these standard visits, we drove past a couple of hawks in the road. Sitting on the road is an unusual place for any bird of prey to be seen, but what really caught my attention was when we drove past them, they didn’t fly away. I had to move out of the lane to avoid hitting them. I quickly ended a brief debrate in my head about whether to keep going, or to turn around, by turning around to see if the birds were OK. I noticed 2 more hawks flying around in close proximity (4 total) making their high pitch shrill hawk calls.

My attention was soon diverted to one of the two hawks that were in the road. It looked to be either injured or learning to fly, as it attempted flight, which only lasted a couple feet, on a couple attempts. Three hawks now were flying nearby, making their high pitch calls.

I called base to report the bird, since it may have been injured & I didn’t know any better. Our back-up driver called the regional falconer, and he told base to tell me to put a blanket or box over the bird until he could get to it, which was about 45 minutes.

All we had in the vehicle was a large spare tire cover, so I used that and approached the hawk cautiously and slowly. I was quite surprised that the bird didn’t try to fly away when I approached, and basically, more or less, allowed me to put the cover over it gently. I thought about what to do and realized I had to stop  up ahead on our journey anyway so one of our clinicians could meet with one of the students in the truck.

We decided to hang out right there off the side of the road with the hawk, especially since it had been raining, which we were later told by the falconer, had added to the challenges that bird was facing that morning. When the falconer arrived, he quickly identified the bird as a juvenile female Swainsons Hawk that was learning to fly that week. We were relieved to know it wasn’t injured, and very surprised to learn that the bird that looked to be struggling to catch flight that day, would be migrating to Argentina in a month from then. The other Swainsons Hawks flying around were the parents  and one extra hawk that we speculate was a sibling or somehow part of that breeds’ community. We also learned that the parents would help feed the young hawk & watch over it, while continuing to teach it to fly until it could join them in the sky, safe from harm on the ground.  I was impressed with the dedicated parenting from this species, despite the environment & elements they faced from extenuating circumstances.

There were several beautiful metaphors that came to mind about how much nature truly has to teach us about our own nature & nurture. It was a rare experience to be able to hold such a magnificent creature & to set it free again knowing it’s struggles were natural and necessary and that she would be taken care of.  by Chris Murdock, Intake Coordinator

RedCliff Ascent is open for admission. We are following guidelines established by the CDC and the Department of Utah Heath regarding COVID-19.