James W. – Cloud Ibex
In September I was given the opportunity to attend an annual primitive skills gathering known as Rabbitstick. The event is held in Rexburg, Idaho every year, bringing in hundreds of people with a common interest. Having worked at RedCliff Ascent for over a year, I was selected for my contributions to the company and commitment to stay another year. With this privilege I was invited to pursue lessons and activities I could bring back to further influence the primitive skills culture of the staff and students at RedCliff Ascent.

Prior to attending Rabbitstick I did not have a sincere appreciation for true primitive living methods. I was proficient in making alternative fires, and I did not expect to learn much more than that. Arriving at the gathering in Idaho, I immediately felt a good vibe from everyone there. Every person greeted me as if I were an old friend, most in the form of gigantic bear hugs. It was apparent I was surrounded by a good community of people, where everyone’s intention was to share their knowledge for future generations. 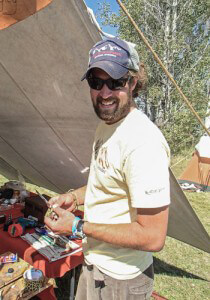 On the first day I sat at the flint knapping station with the goal to create an arrowhead. Fairly quickly I became frustrated with my progress while chipping away at a chunk of Obsidian. I understood the tools and technique, but my work resulted in my rock looking like nothing more than a smaller rock. However, I was drawn back to the flint knapping tent mainly due to the company of people there. I appreciated the consistent instructions and life stories from the teachers. They always spoke in such a calm manner and with greater meaning, constantly pointing out and laughing at their mistakes. When an entire piece did break someone would simply smile, throw it in a pile of rocks, and pick up another. I soon realized that I will not be mastering flint knapping anytime soon, and possibly never. I also realized that I would only progress by finding success through failure.

As with all primitive skills, I learned that the real talent is not the tools or methods used. It is inspiration, imagination, and the patience of the creator that are necessary to build the primitive artwork. As a result of Rabbitstick I am encouraged that I do not have to be a master of any of these new skills in order to teach them to future staff and students at RedCliff Ascent. I simply have to create the opportunity for someone to be their own teacher. 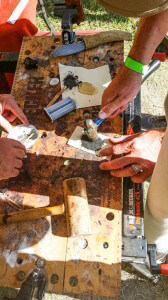 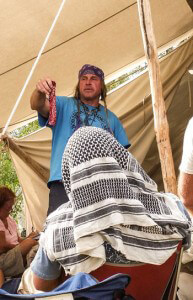